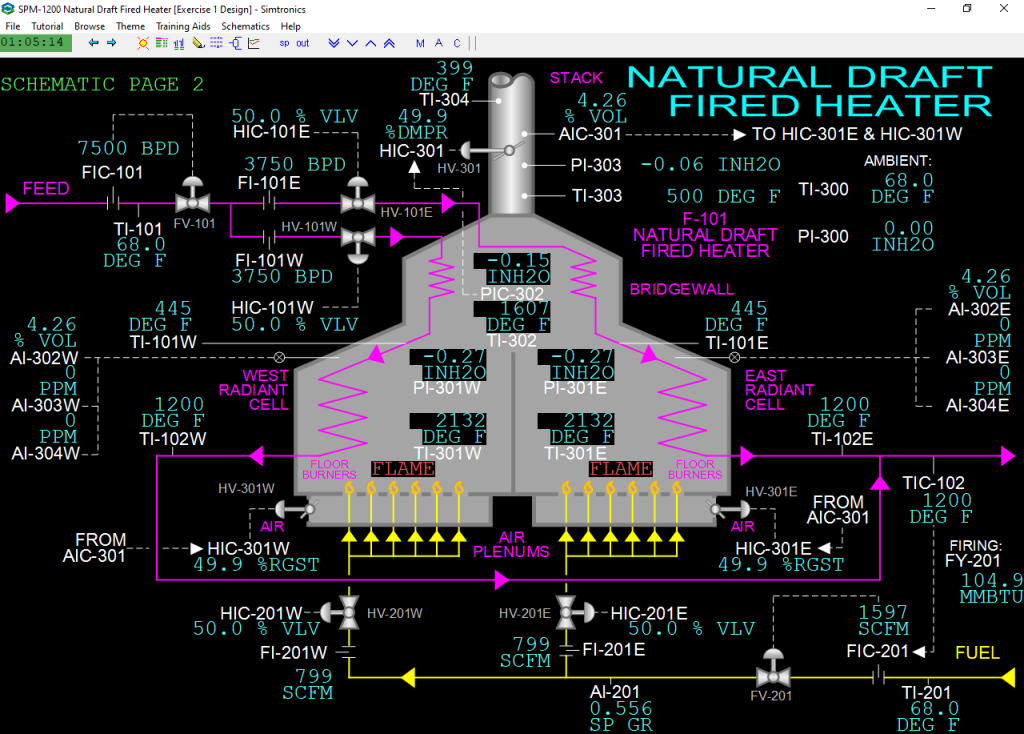 Fuel Gas Firing
Fuel gas from battery limits is split into two lines which feed headers serving floor burners arranged on the bottom of the east and west radiant cells. The fuel gas is ignited and burned with combustion air entering from separate plenums serving each radiant cell. A wall divides the radiant cells up to the bottom of the bridgewall. The burned fuel in each cell primarily gives off heat to the process fluid flowing through the coils in the radiant cells via radiation. All the walls of the fired heater and the separating wall in the radiant section are covered with a fireproof lining that reflects heat reaching these walls back to the tubes and coils in the heater. The lining also insulates the heater walls to minimize heat loss to ambient.

A large damper installed at the base of the stack permits adjustment of the flow rate of flue gas up the stack. To avoid complete blockage of flue gas flow when the damper is in the fully closed position, about 10% of the cross-sectional area of the damper is cut out. This prevents overpressuring of the fired heater.

Fuel Gas Instrumentation
Fuel flow to the burners is controlled by temperature controller TIC-102 which is cascaded to fuel flow controller FIC-201. Fuel flow to the east and west burners can be adjusted by varying the positions of valves HIC-201E and HIC-201W respectively. Fuel inlet temperature is indicated by TI-201.

The stack damper position is controlled by HIC-301.

Volume percent oxygen in the stack gas is indicated by AIC-301.

Advanced Controls
Combustion Air Instrumentation
Air flows into the plenums serving the east and west burners can be trimmed by varying the positions of the respective air dampers HIC-301E and HIC-301W.

The ambient air temperature and pressure is indicated by TI-300 and PI-300 respectively.

The BURNER-E and BURNER-W switches act as both igniters and flame indicators. Note: These switches are not identified by tag on the main process schematic but are accessible on the simulator just above their respective burner assembly.

The draft in the furnace is controlled by bridge wall pressure controller PIC-302. The output of PIC-302 is cascaded to the setpoint of stack damper position controller HIC-301. Adjusting the stack damper position changes the flow of flue gas up the stack which, in turn, affects the draft in the fired heater. Normally, HIC-301 is in cascade mode and PIC-302 is in automatic mode.