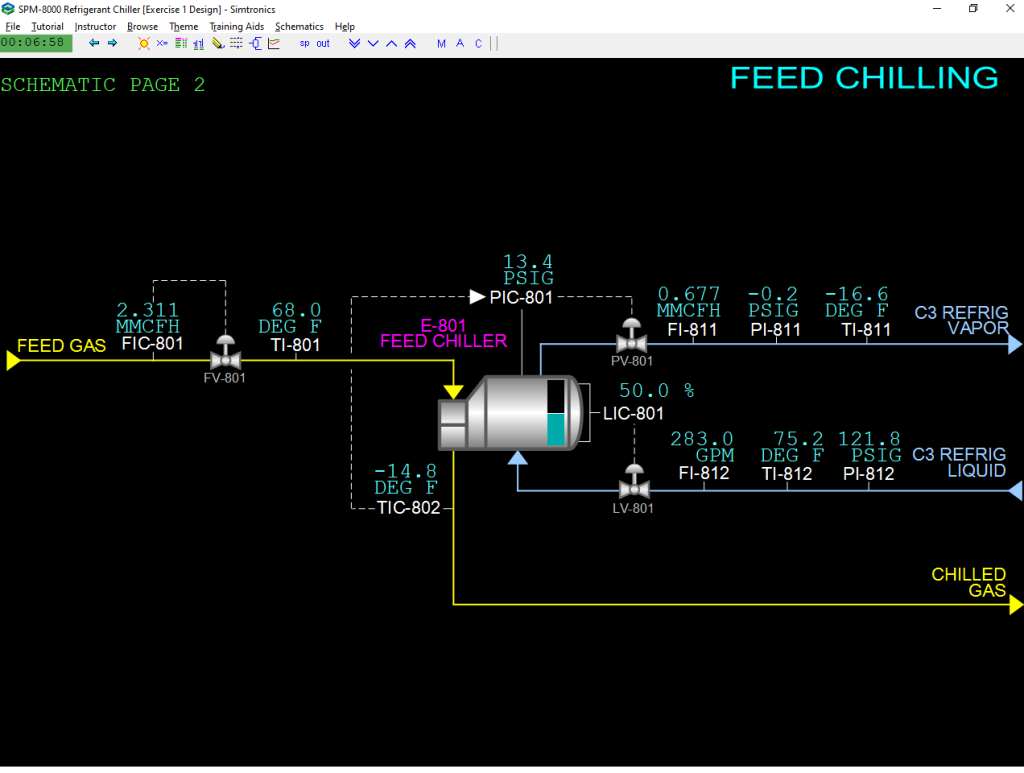 Raw natural gas feed from battery limits at 68.0 DEG F passes through feed flow control valve FV-801 and is cooled in the tubes of Feed Chiller E-801 by evaporating (boiling) propane liquid refrigerant on the shell side of E-801.

The design flow rate of feed gas is 2.311 MMSCF/H. As the feed mixture chills, heavier hydrocarbons in the natural gas feed condense on the tube-side. The chilled process stream exits E-801 at -14.8 DEG F and flows to battery limits for downstream processing.

Propane liquid (refrigerant) from the Propane Refrigeration System flows through refrigerant level control valve LV-801 and into the shell side of E-801. The refrigerant depressures from about 120 PSIG to 13.4 PSIG while going through LV-801.
Depressurization of the refrigerant causes a portion of the liquid to vaporize which causes the flashed stream’s temperature to decrease from 76.0 DEG F to -16.6 DEG F. The design flow of propane liquid to E-801 is 275 GPM.

Normally, the tubes of E-801 are fully immersed in cold refrigerant liquid which draws heat from the process gas flowing through the tubes. The absorbed heat will evaporate (boil) some of this liquid.

The evaporated refrigerant is collected on the top of the shell side of E-801 and returned to the Propane Refrigeration System through refrigerant pressure control valve PV-801 for recompression and liquefaction.

FIC-801 controls the flow of feed gas through flow control valve FV-801. The feed gas temperature is indicated on TI-801.